James Buchanan a.k.a Bucky Barnes is a character of MARVEL comics.

First appearance: Captain America comics issue #1 in the year 1941, the time of world war II. At the Golden Age of heroes, he is a young sidekick to Captain America that has acrobatic skills.

He was captured by Hydra, a terrorist organization with a group of supervillains who made him the Winter Soldier. Armed with a cybernetic arm and brainwashed to become an assassin.

After the confrontation with Steve Rogers in the silver age, he came back to his senses and became a member of The Avengers.

Celebrating MARVEL’s 80th anniversary I made him in his first appearance costume in the year 1941.

I wanted this first Artist Proof card to be a lot more special than what I made for the regular sketch cards.

Since I had 45 cards of practice from the regular sketch card, I gained some confidence and I do have time to think about what to do with my drawing. A simple striking pose will do. Also, I made my shades into lines as an experiment. It did turn out pretty good.

I have 2 Artist proof cards with the labeled “Bucky” in this project Upperdeck MARVEL’s 80th Anniversary.

My concept based on the idea or illusion of the Winter Soldier wearing the old costume. I made his right arm with dark shades, people will think of it’s resemblance to a cybernetic arm.
You can check out my complete progress by watching this video:

Base on the concept of the Winter Soldier drawn with the idea of wind. I wanted a standing pose that is striking with a wind effect. I put highlights to give an impression of a nice Artist Proof.

My work is done from pencil sketches to give the initial idea and proportions. Followed by the ink drawing for the shadowing and line detail.

You can watch my entire work progress at this video.

This my first time to work on both Artist Proof Card for this series and at the same first-time to capture me drawing on video. I decided to upload this at my youtube channel so that I could have a documentary and for me to look back at my work.
Later I decided to do this in all of my Artist Proof cards and probably in some of the regular Sketch Cards.
It took me 4-5 hours to draw this character. 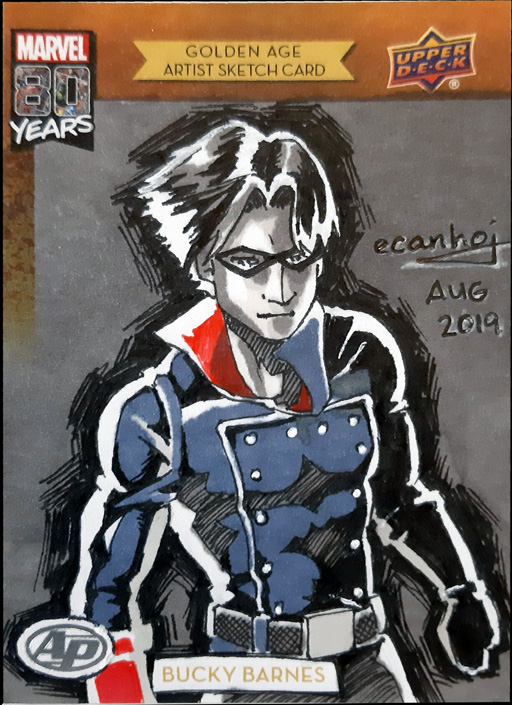 STATUS : This card is AVAILABLE to purchase.

If you are interested to purchase this Artist Proof Card, you can sign up at my form >>

Get Artist Proof Sketch Cards HERE!
" This is my first sketch card in this series Marvel 80th Anniversary. Made it with time and effort than my regular sketch cards. "