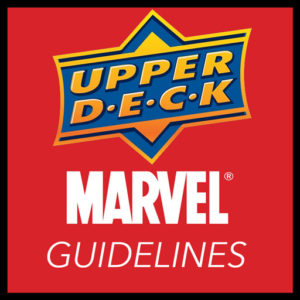 Hello! here I made UPPER DECK MARVEL Sketch Cards Guidelines for me an other sketch card artists who sometimes forget or just skipping to read the document given or if we got no time to read so. Let be informed about what to DOs and DONT’s. This is also reference to commissioning clients so that they know what not to draw to avoid being rejected by MARVEL.

After I read the documents as the way I understand everything, basically our target audience are young people from kids to teens up to adult card collectors who really loves super hero characters. We artist need to keep in mind that our drawing should be environment friendly and inspiring to look at.

DO's that are allowed

LIST OF CHARACTERS THAT ARE NOT ALLOWED TO DRAW

Some characters are not allowed by Upper deck Marvel due to license issues owned by other companies.

Example: Fantastic Four license ownership is being debated by FOX and Disney so currently they could not be used in other franchise.

And in some awkward sense some characters that are not kid friendly like Apocalypse and Nightcrawler are also not allowed.

Basically we need to take note that we only need to draw the characters in the MCU universe of the current date.

* Note that this includes not only Earth 616 but to all versions of Marvel’s multi universe.

Others in alphabetical order.

I’m guessing that these characters are probably way to old and are out of license. Most of them are cosmic characters and alien races.

Once you have read the rules then you’re ready to draw the character in Marvel Sketch Cards. Don’t hesitate to come back in this page for a review.